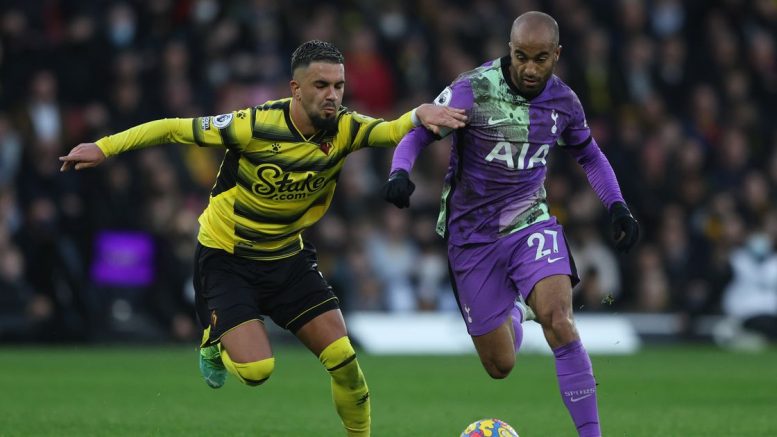 Bachmann – Made a good save in the first half, and another couple in the second – the pick of the bunch was a fingertip reach to push Son’s volley wide. 6.5

Masina – He will be pleased with his performance after having a difficult time against West Ham. Defended diligently throughout. 6

Repost-Ekong – His last game before heading off to the Africa Cup of Nations. He looked a lot safer than he has in recent times, good to see him leave on a positive note, even if the result wasn’t there. 6

Sierralta – Did well to handle the threat of Kane. It’s promising to have him fit and playing again. Looks solid. Such a shame they couldn’t cling on to the clean sheet. 6.5

Cathcart – Playing at right-back, though often dropping more centrally, he was a big part of the defensive effort. 6

Sema – Couldn’t fault his endeavour. Worked really hard going backward and forwards, even if the quality in his final pass wasn’t still always there. 6.5

Sissoko – Against his former team he battled hard for the result, just as you would imagine. Didn’t see a whole lot of the ball, but used it well mostly. 6.5

Louza – Watford always look a little bit more sure of themselves when he starts in the middle of the park. His composure helped handle a lot of Spurs’ pressure. 7

Kucka – Playing in a new role as a right midfield, you couldn’t fault his work rate as he helped Cathcart out with the defensive side of the game. 6.5

Dennis – All eyes were on him after the news that he would not be going to AFCON. His body language seemed fine, albeit a little tired. Had one nice piece of play early on but was subbed at half-time. 6

King – Playing as a striker in a more traditional two, he combined well at times with both Dennis and then later Joao Pedro. Forced Hugo Lloris into a great save. 7

Pedro (on from Dennis, 45) – Had one brilliant run where he looked like going all the way until the referee decided to give a free-kick to Watford – when advantage would have been better. On another day could have had a penalty after Lloris came rushing out. 6.5

It comes amid soaring rates of the Omicron variant HertsLive…