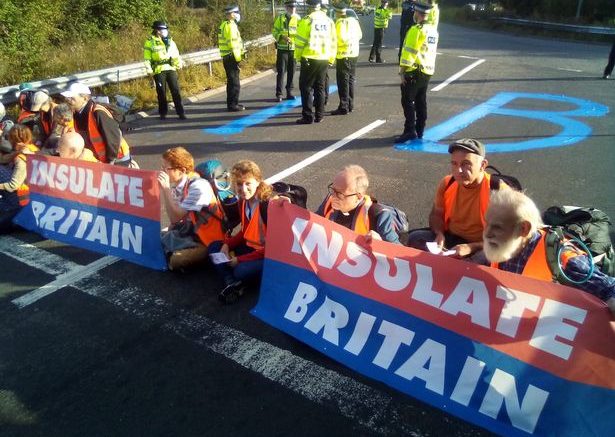 The Government will pledge to introduce prison sentences for activists who block motorways after a series of protests in Hertfordshire and nearby counties.

The Conservative Party were under pressure to enforce new changes after days of protests by the Insulate Britain group.

The group brought the M25 to a halt in Hertfordshire, as well as elsewhere around the ring-road, as well as the M1 and M4 too in a bid to raise more awareness of their cause.

Read more: The latest news going on in Hertfordshire

At the Conservative Party conference in Manchester, Home Secretary Priti Patel will warn that protesters who block the highway could face unlimited fines and up to six months in jail.

Police are also to be given the powers to stop and search activists for “lock-on” equipment used to prevent them from being moved.

It comes just days after the group targeted the M25 on the Hertfordshire border blocking the roundabout at J25 for Enfield.

Activists glued their hands to the road and chained themselves together which halted traffic for some time and led to police closing both slip roads at the junction.

The Government on Saturday obtained a fresh injunction banning the group from obstructing traffic and access to motorways and major A roads in and around the capital.

The new powers to be announced by Ms Patel will be included in the Police, Crime, Courts and Sentencing Bill currently going through Parliament.

Ministers argue that while they accept the right to protest, the current offence of obstructing the highway, which carries a maximum fine of £1,000, does not reflect the seriousness of the disruption such actions cause.

Ahead of her conference speech, Ms Patel said: “The right to protest is a fundamental principle of our democracy but we will not tolerate guerrilla tactics that obstruct people going about their day-to-day business.”

Prime Minister Boris Johnson added: “This Government will always stand on the side of the law-abiding majority and ensure the toughest penalties possible for criminals who deliberately bring major roads to a standstill.

“We will give the police the powers they need to stop their reckless and selfish behaviour.”

‘It was a massive undertaking and I cannot thank every single person enough who was involved.’ HertsLive – What’s On News …

Here are some March flight deals from easyJet, Ryanair, TUI and Jet2… HertsLive – What’s On News …