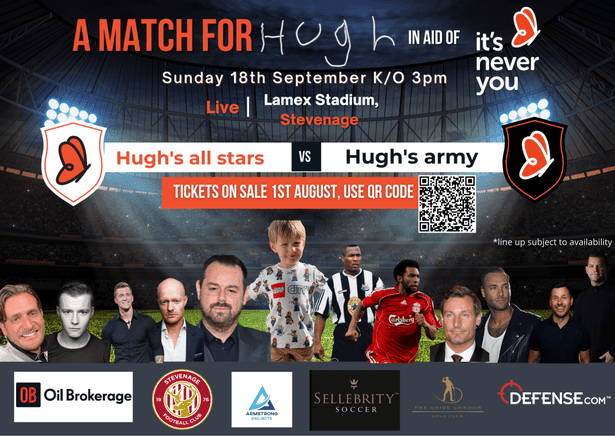 Hugh Menai-Davis was just five-years-old when he was diagnosed with cancer in May 2021. The little boy from Hertford was winning his battle against the rare and aggressive disease before he got the all-clear after six months.

He was allowed to ring the bell at Addenbrook’s Hospital to signal the end of his treatment and his family was overjoyed and excited for the future. In August of 2021, he celebrated his sixth birthday and he was the picture of health.

But his cancer returned. Hugh’s parents were tragically told their little boy was dying and nothing could be done. Hugh passed away on September 18 of that year.

In the months after his death, Hugh’s parents were able to incredibly set up a charity in his name to help support parents of other children with cancer. Ceri Menai-Davis, Hugh’s father, has been determined to share his story and ensure he’s never forgotten.

More recently, it has been announced that a huge celebrity football match in aid of It’s Never You, the charity created by Hugh’s parents, will take place in September in honour of the little boy. The match has been called ‘A Match for Hugh’ and will take place on Sunday, September 18 at 3pm in The Lamex Stadium, Stevenage on the first anniversary of his death.

Two celebrity-studded teams will compete managed by football legends Les Ferdinand and former footballer and It’s Never You Trustee, Jermaine Jenas . Celebrities that have been confirmed for the match include:

Tickets are currently on sale and cost £15 for an adult and £5 for a child under 16. Adults must accompany those children under the age of 16. As well as this it has been announced that Billy Wingrove will hold a football clinic at Stevenage Academy, with tickets set to go on sale very soon.

Ticket can be brought online here. You read more about Hugh’s story here. 19 things to do this weekend, from beer parties to live concerts HertsLive – What’s On News …