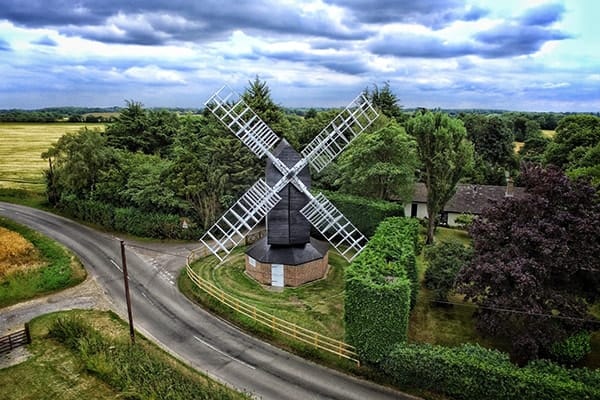 Cromer Windmill – Hertfordshire’s sole surviving windmill and a grade II* listed building dates from 1681, as determined by a dendrochronological survey conducted in 1998. It stands on an artificial mound just outside Cromer, near Ardeley, in which parish a windmill has stood for nearly 800 years.

Although blown over around 1860, Cromer Windmill was re-built and used until the 1920’s when milling by wind became uneconomic and the mill fell into disrepair. Apart from some repairs conducted in 1938 and sails having already been removed for safety, nothing further was done to the mill until an appeal in 1964 from concerned local people to save the windmill.

The recently formed Hertfordshire Building Preservation Trust then took on the mill as its first restoration project. The work was carried out in four phases at roughly ten year intervals as money was available. In 1998 the final phase saw shutters and striking gear fitted to the sails and the internal machinery rebuilt, bringing the mill back into virtually full working order. However, in 2014 the Trust had to embark on a second cycle of restoration by replacing the ladder and fantail, which at nearly 50 years old were at the ends of their lives. This phase was completed in April 2015.

~Things to do and see in Stevenage~